ONLY STOCKED at Virginia, Brisbane & Molendinar, Gold Coast & NEWCASTLE... BUT WE CAN EASILY POST THEM TO YOU!

No visible fixing from outside of property – visually appealing & better security.

We believe these are the Strongest and Best looking Security Fence Brackets available:

DON'T FORGET TO BUY SCREWS! (You will need 20 screws per panel/per fittings set of 4 brackets).

This is enough screws to do 1.25 Bracket Sets/ Fence Panels (or 5 Individual Brackets). To work out how many screws you need simply divide the quantity of Brackets sets by 1.25. ie: 9 brackets sets divided by 1.25 = 7.2 bags... So you will need to order 8 bags to complete your job.

Option 3: Standard Tek screws AND Anti Tamper Screws: Because Anti Tamper Security Screws are expensive, a common practice is to just use two Anti-Tamper screws per bracket (8 per panel) and then use standard tek screws for the other holes. (So a pack of 25 screws would cover 3 Panels/ 3 Bracket Sets). You would then only need 3 x standard Tek screws per bracket or 12 per panel. (A Bag of 100 Tek screws would then cover 8.25 panels/ Bracket Sets).

Here is a chart for Option 3 to quickly know how many packets of screws you will need to buy: 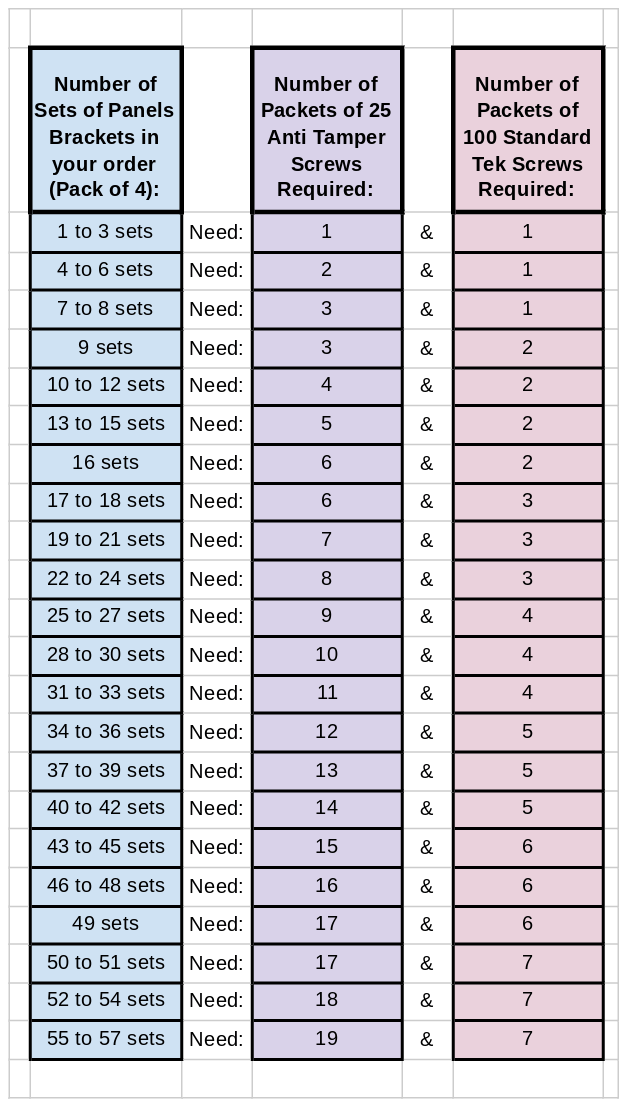